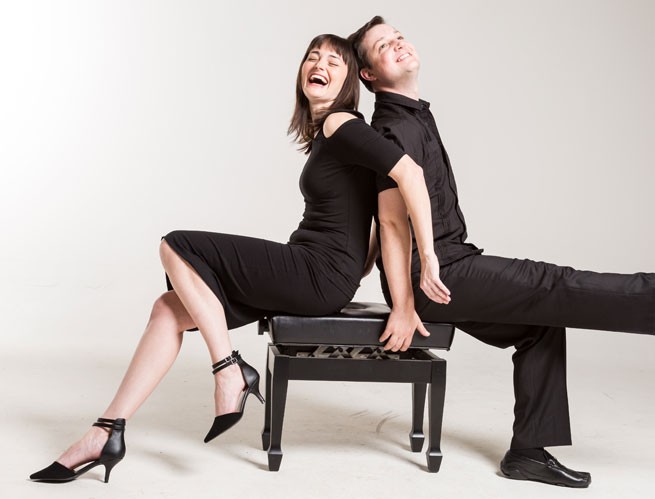 What do you get when you combine a driven, neoclassical choreographer with a business-savvy impresaria and an Irish feminist composer? You get the newly formed Ballet Evolution, a collective of artists led by choreographer Jonathan Tabbert, Chamber Music Charleston director Sandra Nikolajevs, and composer and performer Laura Ball. Ballet Evolution plans to offer original dance and live music performances to Lowcountry audiences, debuting — fittingly — with the Ancient Tales, a ballet telling stories of creation on Feb. 27 at the Sottile Theatre. As with any new arts organization, they have their work cut out for them, but their dreams are big and their hearts are in it.

Like the revolutionary 1920s-era Ballet Russes — a ballet company that brought together artists like Picasso, Balanchine, and Stravinsky for a new approach to making art — these young Southern artists refuse to exist in a solitary vacuum of creative expression, instead pooling their talents to make something new. It’s the old adage that two heads are better than one. Tabbert says the mantra of the new group is “collaboration, education, and innovation. It takes having those three components to create a thriving artistic community, and it is those same elements that make our artistic voice so unique.”

The collaborative form, says Ball, is really the most natural and organic way of making art. “The traditionally accepted model in not only ballet, but in many kinds of art forms, is to have an artistic director, largely in isolation, making many key decisions related to vision, planning, development, and execution of ideas … With Ballet Evolution, there is a voice — that of choreographer and Artistic Director Jonathan Tabbert — but it’s followed closely by Sandra [Nikolajevs] and me, which brings an incredible sense of balance, preparation, and interdisciplinary experience to the creative equation.”

The group was inspired to embark on this endeavor after producing The Little Match Girl, an original ballet that was choreographed by Tabbert, scored by Ball, and performed by students from the Charleston Dance Institute, the school that Tabbert co-directs with Stephen Gabriel (both are former Charleston Ballet Theatre principal dancers). Nikolajevs’ Chamber Music Charleston ensemble performed the music on stage with the dancers.

Nikolajevs, who is a conservatory trained bassoonist who has studied in Paris and at the Juilliard School, was enthusiastic about becoming involved with Ballet Evolution after her positive experience with The Little Match Girl. “I was eager to lend my personal experience and talents — as an artistic director, producer, administrator, and musician in my own right — to the formation of a new ballet company.” She adds that working with the two other visionaries, as she calls them, on The Little Match Girl was an extremely satisfying experience.

When the creative collective decided it was time to bump things up to the next level and hire professional dancers, embark on new works, and bring in even more collaborators on a project-by-project basis, the group began to flourish. The first performance, Ancient Tales, is a concert that includes three original ballets based on the Creation stories, famous Greek myths of gods and heroes, and ancient religious chants and melodies. “I think people will be enticed by how we have visualized it — sleek and neo-classical,” Tabbert says. “We don’t shy away from stories with meat.” Ball adds, “The opportunity to delve into older stories of how we come to be and who we are — mythology, fairy tales, creation accounts — is absolutely irresistible as a storyteller. Ancient Tales has been a personal journey for me in terms of exploring my beliefs, memories, and conceptions of the human relationship with the natural world.”

The two principal guest artists, who will dance the roles of Adam and Eve, are Andres Neira (from Columbia) and Ezlimar Dortolina (from Venezuela). Both have garnered international and national acclaim with a multitude of companies.

Ballet Evolution’s next three seasons are already in the works and will include sounds inspired by everyone from Gershwin to French Romantic composers. “From the smallest details of the set to the grandest fortissimo and jeté, we are all committed to creating an experience of somatic excellence for our audiences,” Ball says. “The best part about having such a broad-based creative team is that we have significantly fewer limitations than many other companies, and that gives us the element of surprise. We plan to keep our audiences — and dancers — on their toes.”