Laura Ball plays with tradition in her UNED!TED series 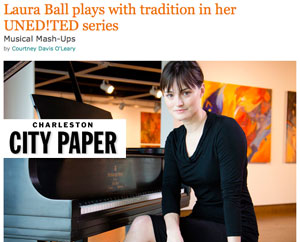 The second it gets quiet, you feel a tickle in the back of your throat. Or you’re supposed to sit still, but your foot is asleep. It’s this cringe-worthy restlessness that inspired Laura Ball to create contemporary chamber performances that don’t punish the audience. “You’re not going to get into trouble for coughing, for shifting in your seats. We want you to make noise, to laugh if it’s funny, clap if it’s great, whistle, snap if you feel moved by the beat.”

Ball vividly remembers squirming in her seat as a child. “When I was a kid and went to the symphony, I had the hardest time sitting still. I wanted to know the story behind the pieces, about the composer, their lives, how instruments work, why didn’t we clap after every movement.”

This premise is at the core of her current work with the UNED!TED series, which she began four years ago. “There is a cultural structure to when you clap, such as when the conductor comes out,” says Ball. “No one hands you the rules that say, ‘When you listen to this music, this is what we do — this is acceptable, this is when you clap, don’t cough, etc.'”

It only made sense that she would try to create something that pushed against old rules. When the Library Society offered Ball a space to put on a concert in 2010, she started to think of music concepts she didn’t like. “I didn’t like that in the presentation of a traditional concert, the audience is uncomfortable or supposed to behave a certain way or performers don’t talk. The most exciting part of music is the story — why you chose it, where it came from, interactions and cultural context that affects what you’re singing or how you’re playing. There is so much editing between starting out and selecting a piece to play.”

And from this idea, UNED!ITED was born. The first performance, Dixie and Denim, set the casual tone by encouraging the audience to wear blue jeans and listen to a traditional string quartet and two pianists perform folk songs from different regions of the U.S. The reaction was overwhelmingly positive. While 20 people were expected, about 100 showed up, and UNED!ITED was invited back to host future concerts at the King Street space.

Ball has thought quite extensively about what she is doing and why. It’s the very premise of her PhD thesis in interdisciplinary arts that the native Charlestonian obtained at Goddard, a private liberal arts college in Vermont.

“Interdisciplinary arts is a new buzzword in the art field, developed as we make our own way,” she explains. “I always liked to combine different disciplines of art, not just music in isolation or literary arts and humanity, or theater. I was always creating a mishmash of all of them. We were so often asked or forced to choose between them when I wanted to know why they weren’t related. Why couldn’t I multitask — sing and play and write and produce? I wanted to be a jack-of-all-trades and a master of all of them.”

The overarching theme of her work is fostering community. “The disciplines can be united towards a common purpose: To build community through people’s differences,” she says. “Instead of segregating people and artists, use those differences to weave people together and try new things.”

This weaving together of people and artists is seen again and again in UNED!ITED’s programming. In the first season, they mixed genres, putting on a show with Beatles and Bach. The next year, they incorporated various mediums, having piano and string players present the literary art of Shakespearean sonnets. Dancers. Slideshows for visual commentary. Latin music. Classical guitar. The combinations are endless and inspiring. The Bluegrass and Gospel Blues shows not only melded two musical genres but gathered together their disparate fans into one audience.

From finger snapping to learning movements, audiences are urged to interact. She once made people do a blind contour drawing of their neighbor, whether that was a friend or a stranger. “When people get involved and they become a part of something, they’re no longer passive but part of the action,” she contends. “It’s a different kind of relationship with music, art, dance, theater, and literary works. It was what artists are experiencing with the material. It gives the audience a taste of what it feels like.”

UNED!ITED is everything Ball wants from music. “It’s always about the collaboration. I never wanted to be a concert pianist. It’s so lonely. I so love connection and music and friends and fans and knowing people. I wanted to infuse this with traditional concert practices, and introduce all the elements I thought were missing.”

UNED!ITED may have begun as a thesis but it’s become an ongoing art event that has amassed a following. “We’re doing about four events a year. Most concert series start out with strategy and long-term development in place, and this is more old school – doing it over and over, and working with other people and seeing what it wants to become organically. It wants to grow in terms of audience outreach but it’s designed for smaller places. These two things are in conflict. It’s a great problem to have. I’ve no complaints.”

Her next concert, Black and Blues W-O-M-A-N, takes place amid the visual art exhibit Spirit and Memory: Contemporary Expressions of Cultural Heritage at the City Gallery at Waterfront Park. Ball says they will explore the themes of the exhibit with musical soundscapes and traditional rhythms.

“The rhythm of blues has roots in the gospel playing and praise singing that is still strong here in the Lowcountry,” says Ball. “The strong beats, claps, call-and-response shouting — all of these are key elements of community singing. It was and is still all about the movement. We want to bring that sense and feeling and experience of movement to the audience as they celebrate this rich musical heritage with us.”

If you go, expect to sing along and stomp your feet, because that’s what UNED!TED is all about.