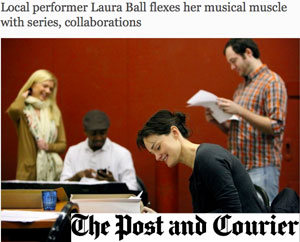 Read the article here.
In Charleston, where isn’t Laura Ball and her music?

The chanteuse, equally at home in a club, library, playhouse or concert hall, has run the UNED!TED series for four years, ramping up its eclectic programming and establishing a niche for herself and her fellow performers.

She’s working with Brad and Jennifer Moranz on the couple’s summer and fall revues, and she collaborated with the Charleston Dance Institute and Chamber Music Charleston on an original ballet, “The Match Girl,” for which she wrote the music.

At The Mezz recently, Ball presented a cabaret-style set featuring two singer-collaborators. Ball assumed her usual position at the piano and capably fingered her way through a variety of tunes, from standards such as “Can’t Help Lovin’ Dat Man” and “Someone to Watch Over Me” to Journey’s “I’m On the Edge” and Beyonce’s “If I Were a Boy.”

An endearing feminism colored the cabaret: Ball and her colleagues, New York stage veteran Mary Fishburne and 15-year-old School of the Arts student Shelby Levine, asserted their girl power through song choice and introductory quips from the piano.

The event was lacking the cigarette smoke, sexual innuendo, anti-establishment attitudes and variety of a true cabaret, but it was undeniably entertaining. The sold-out room frequently burst into applause.

Ball held it all together with her easy-going banter and keyboard competence. No wonder she is garnering notice.

When she was 3½, Ball caught sight of her grandmother’s piano and wondered at its potential. Soon she was learning music in a Yamaha program, encouraged by family friend Charles Fox of Fox Music. Later, she was taking lessons with Russian and Korean teachers.

As a teenager, Ball launched a modeling career, working in Chicago and Miami, signed by Elite Model Management. She was in the same recruiting class as Heidi Klum and Giselle. During those years, she decided she wanted to become a professional musician.

“It was the best preparation ever for a career as a performer because it was so strict and tough,” Ball said.

In 1998, after graduating from Bishop England High School, she enrolled at Catholic University in Washington, D.C., lured by its cosmopolitan environs and the large collection of music scores housed at nearby Gallaudet University, a private school for the hearing impaired.

She imagined she would become a pit pianist accompanying Broadway shows, or maybe a conductor, she said.

Three years later, she was back home, studying voice and piano at the College of Charleston. After this phase of her schooling, Ball worked with Charleston Stage, Village Playhouse and Company Company on various productions. She wanted to focus on singing, and considered going to New York City to study opera.

But her father’s ill health kept her in Charleston and looking for new opportunities.

She found one when she enrolled in Goddard College’s “low residency” MFA program, in which she could design her own course of study and pursue it largely from home.

UNED!TED was her thesis project. The concept was to make concert programming accessible and close the gap between audience and performer.

Spectators were encouraged to interact with the performers, to participate in the concert experience.

This approach encouraged Ball to mix up musical styles, too. She combined blues and bluegrass, rock and jazz, Beatles and Bach, exposing audiences to new fusions and associations.

“The Match Girl” ballet was another example of this sort of thinking, she said. It brought together three arts organizations, “incubators,” Ball called them, to design something new. That project was successful enough to trigger a new collaboration among the three groups, a ballet called “Genesis” that should premier in early 2015, she said.

Ball straddles a musical fence, playing both classical and popular music. She played by ear initially, and that ability has served her well, enabling her to learn songs quickly, improvise and collaborate easily. Most of her friends back then were in rock bands or played jazz.

She is one of those capable doers who seems to possess a perfect combination of performing and organizational instincts. Ideas materialize and get implemented, and Ball is almost always the one front and center. She thinks of herself as a “community artist” and “arts activist.”

This attitude spills over into church. She is music director at Holy Spirit Catholic Church on Johns Island, where she plays the organ, leads the choirs and sings some solos, presenting parishioners with a mix of traditional and contemporary music. Her commitment is not only religious; Ball’s goal is to boost the importance of music as a means to achieve community and encourage collaboration.

Brad Moranz and his wife produce musicals, revues and holiday shows in the Charleston area. Casting those productions is a delicate and sometimes complicated task, for the Moranzes are looking for experienced and talented professionals, he said.

“Because Laura is so busy, we only get Laura when we can get her, which is a testament to her talent,” Moranz said.

Usually, Ball plays piano or keyboards for the shows. Sometimes she sings, too.

“She is incredibly professional,” Moranz said. “She’s got a very strong work ethic. I don’t say that about everybody.”

Talent alone is not enough, he added. An artist also must demonstrate an ability to work well with others.

“What they contribute to the whole is what sets them apart,” Moranz said.

UNED!TED is a chamber concert series presented at the Charleston Library Society downtown and in private homes. It operates under the auspices of the Charleston Regional Alliance for the Arts, which acts as fiscal agent for the initiative.

“You should sell tickets to these,” she told Ball.

“Well, I need a venue,” the musician replied.

“Well, I have a venue,” Cleveland said.

It was a mutually beneficial partnership. Ball got her venue, and the venue got new programming. Soon, UNED!TED had banked enough money to buy a proper Steinway piano for the space. The name of the series was inspired by the books in the library’s stacks, Ball said.

Four years later, Ball remains committed to the Library Society but wants to use other venues, too, like The Mezz and the John L. Dart Library on upper King Street. She wants to add more programming, like cabarets and shows for children.

She is thinking about the difference between exposing young people to the arts and actually spending quality time teaching them about the arts.

“It’s important to find opportunities where we might find a few kids who grow up to be musical activists,” she said.

Jonathan Gray, a bass player, teacher and fellow musical activist, has joined Ball for the “Beatles, Bach and Beer” shows she’s organized at the Library Society.

“She programs the kind of shows that can appeal to a really broad group of people,” he said. And her musical niche is attracting a growing audience, Gray added. “She knows now she’s got enough of a presence to put on these shows, a high enough profile.”

Mary Fishburne, a Rock Hill native who gave up a burgeoning career in New York City to pursue stage opportunities in Charleston, heard about Ball as soon as she got to town in 2011.

“People said, pretty quickly, ‘Oh you sing, you like to perform? You have to meet Laura Ball.'”

Last year, the two women finally met and quickly struck up a musical relationship. Fishburne joined Ball for the recent cabaret night at The Mezz, a show they hope to re-create regularly.

“We got together and sang through some songs,” Fishburne recalled. “We knew pretty soon that we would need to be doing more of that together.”